And another new gliding kite...
Skyburner Kites has brought out a new canard style glider... 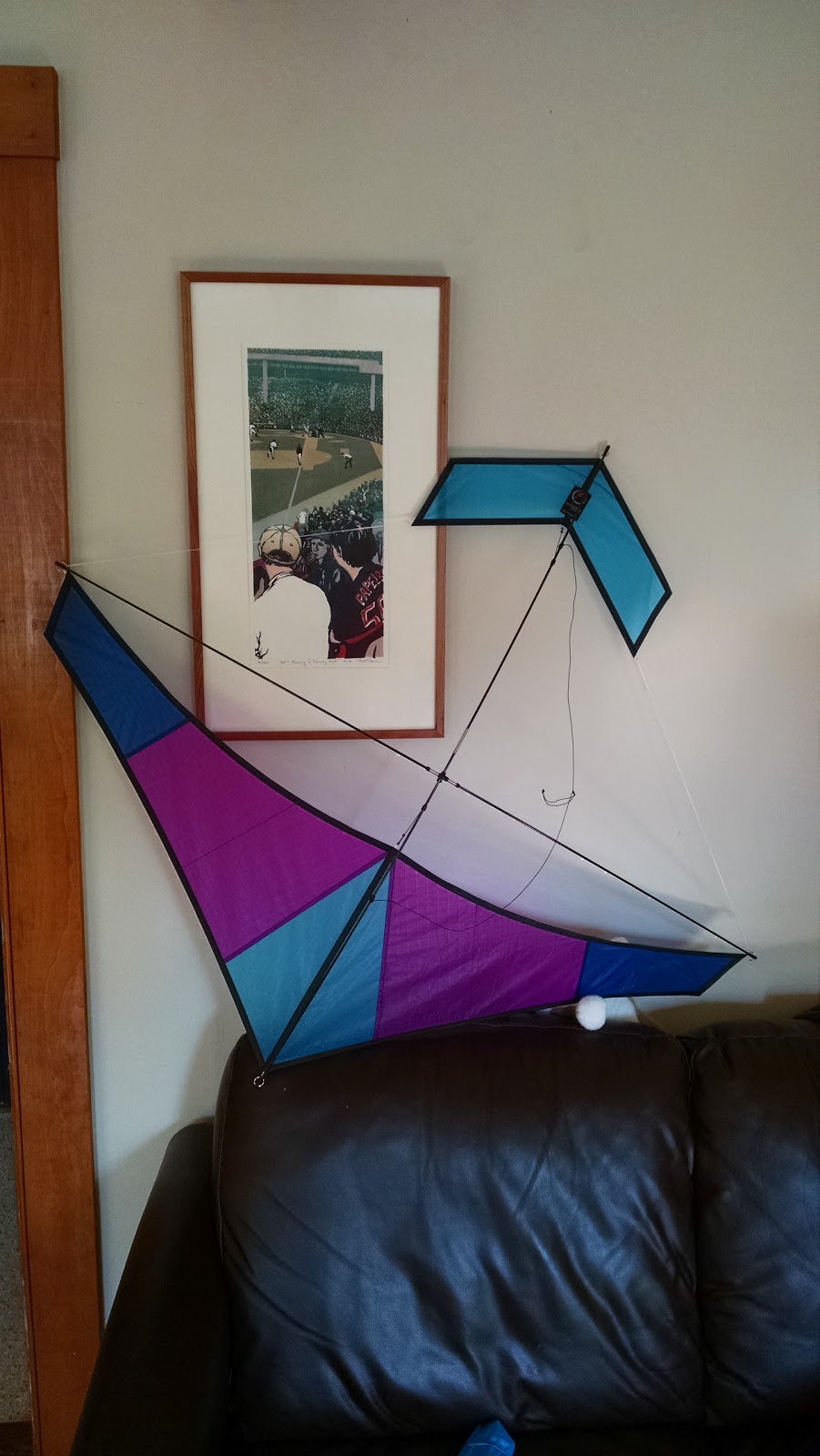 This is like the Plutz glider family from ceewan (including the Zero G from Prism), with some new tweaks on it.

The front wing is not just a basic triangular shapes, it is more of two polygons stuck to one another, this should provide a bit more front support for gliding. 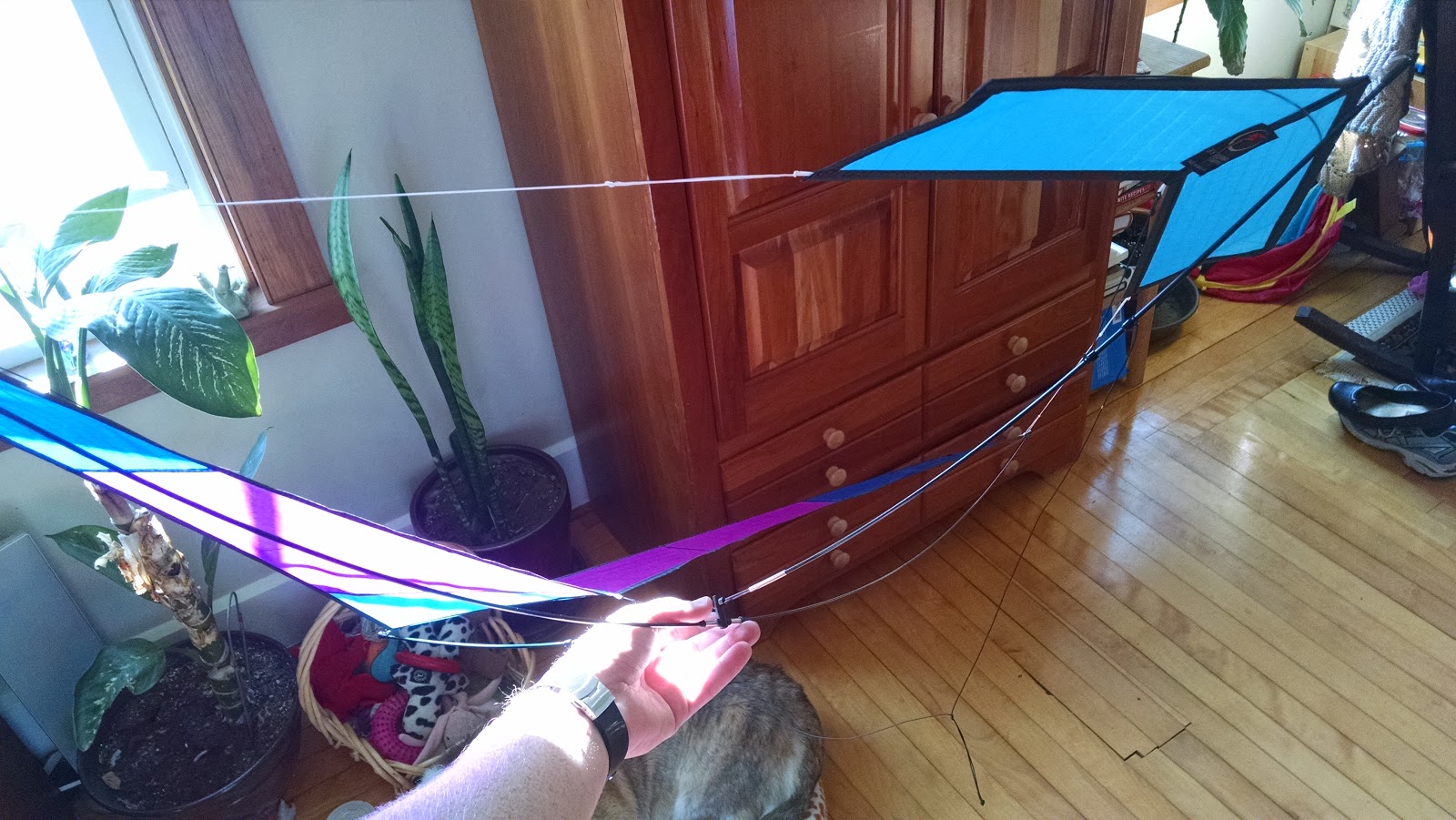 The Aerolite comes with a simple drogue for when you want to fly it as a stable kite (why would you?) or in higher winds but still active.

There seems to be a good amount of adjustment as well from the bridle and the position of the Center T that I will have to play with too...

This kite is not on Skyburner's website yet, nor the Kites 'n' Fun Things site either but you can call or email them to get one.

Updated 10/22/14: The Aerolite is now on both the Skyburner website as well as the Kites and Fun Things website with a price of 145$

A new gliding kite to check out

So, a new gliding indoor xUL kite is out there.  The 3D Magic Angel from Lam Hoac.  I have spoken with Lam about his new kite a bunch, but had not had a chance to get one into my hands until now.
This is the small version, there is also a bigger version available as well.

First thoughts: looks like a hybrid between a R-Sky Bird'x and an iFlite.   The spreader is just like the spreader design on Horvath's kites, the Chiroptera, and the iFlite family; on the front of the kite and flexible.  This makes the kite's wings able to bend backwards in large "gusts" of wind/apparent wind.
The spine is sewn into a tunnel that creates a small keel.
The tail has a simple bow rod like the Bird'x and can act as a rudder sometimes twisting opposite to the main sail direction making the kite carve through the room.

Things to note:
Bridling: there are two ways to attach your line.

The leading edge connectors are made of simple tubing and are provided about an inch of adjustment on the leading edges....now this is interesting....this adjustment, made by slipping the tubing up or down, can completely change the angle of the wings.  Slide the connectors forward/up and the wings are held at a higher angle backwards; and conversely slide the fittings down/back and the wings are flatter.   Take note that moving the fittings really also changes how the spreader crosses the kite, but the spreader is permanently attached directly to the spine by its retaining line.   So, in moving the fittings you end up also moving the spreader forward and backwards too - this gets interesting.

Between the fittings adjustment, and the two differing bridle options you have a lot of changeability here.   I have yet to find the positions i really like yet, but then i like a more active flyer indoors rather than a glider (if I want to glide i take out my Feathers!).

The framing is light....super light....all microcarbon rods, and it looks like the bottom of the spine, where the tail is, is an even thinner rod that is slid into the main spine.  This thinner spine rod actually make the kite's tail flip upwards when the kite is gliding/dropping backwards and make the kite slow losing altitude.
Super clean stitching on the icarex skin, i am guessing that Heads Up is sewing this for Lam.   There is a funky little plastic fitting on the bottom of the spine, it might be a Flying Wings fitting but I am not sure, it looks like one that is on their Laima.

Flight:
Well, there are options abound.   I have flown this kite a bunch indoors with all sorts of settings and I think that i like the flight of the full bridle and the fittings all the way forward.   But when the single attachment point is used, and the wings are flat this kite is a great glider, albeit a fast one.
*as we are into the fall winds already i have not had a chance to take it outside yet to see how it does with gusts of real wind interspersed with nothing at all...hopefully i will be able to soon.

If you can get your hands on one, enjoy flying indoors, and like tweaking settings this kite would be a lot of fun for you.   If you are looking for a super easy kite to fly indoors right out of the tube/bag then you might not enjoy it as much as it takes a bit to figure out what you like.

Been awhile since the last post....off...some busy times around here.....have you checked out the site lately? there are some new kites ready to go...both on the site and a bunch of special pieces in the Yard Sale too!

There are kites ready to go right now!!!
No comments: