New Items, not kites though.

Okay, I will admit it. I have a thing for Rubber Duckies. Always have. I have no clue as to what started it. Our niece was staying with us, and I mentioned something about there being at least one rubber ducky in each room. Thanks to good suppliers-I mean friends we can actually say that, the bathroom alone has the smallest duck and the largest duck, and about 15 others.

A good friend was at the American Kite Association National Convention in 2006, I called him to see if there was anything in the auction I might be interested in. "A bunch of yellow ducky banners" Rob said. I immediately had to have them. Two weeks later a package of yellow ducky banners appeared at the house, and have since then spent a lot of time in the front yard-to the amusement of our neighbors!

2007 AKA National Convention comes around, but this time he called me to see if i wanted to add to the flock. "Of course!" Three weeks later our Ducky flock had doubled, but with a few new Duck species.

So, it is with much delight that I announce that Windswept Kites is only retailer carrying Mike and Cel Dallmer's Ducky banners! You might have seen them at a festival. Well now you can get them!

How big of a flock do you nee 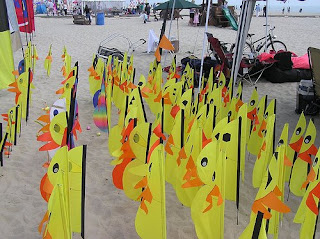 
Picture by a member of the Dallmer family
No comments:

Out to the Park

Sunday Oct. 12th there will be a gathering of kiters at Brenton Point State Park in Newport RI. There just might happen to be a box of kites, banners and such headed down there for a few hours.

For those of you who might want to go but have not been to Brenton Point before here is a map for you:

If there is something you want from WsK bring cash/check/or an internet accessible phone (for paypal at the field!) and you can walk away with it.
Look for the blue ute ( since our banner is back with Dave right now while he makes a 2nd one to match the first) to find us.

Hopefully everyone out there is enjoying a good holiday weekend!

Well I am learning out there.
There was an issue with the last time I updated the Aerial Art page.
I had lost the thumbnail images on the page,
but you were still able to click through on the link to see the larger view.
So, a bit of trouble shooting, and of time, and learned what might have been the problem (and fixed it-a bit of operator error). So check that pile of painted ripstop out.

I will admit that even though the images were not on that page some people found the viewable link and still purchased items! Quite determined!

Soon going up will be the Dallmer Duckies Flock.
Fun little ducky banners to add to the garden or the flying field.

So far there are only 3 of you using the feedburner email system.
Does that mean that lots more people are reading this directly?
Please feel free to drop me an email and let me know!